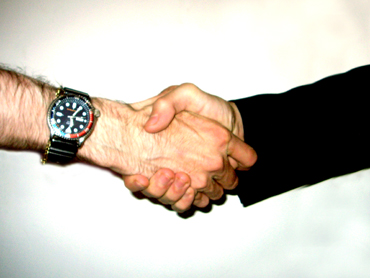 When I started my own business a few years ago, the thought of networking terrified and annoyed me. First, I am not what one might describe as overly sociable. Second, I thought it sounded nauseatingly cheesy. As my business (and, consequently, I along with it) grew over the years, I have come to peace with networking. Most importantly, I’ve come to realize it isn’t just about selling myself or my company. My networking efforts have provided me with valuable acquaintances, some of whom have come to form a support system, something über important as I have navigated through the tricky (and quite frankly scary) waters of entrepreneurship.

I’ve learned a few tricks and have found I now, unabashedly, enjoy meeting new personalities who challenge me and bring a little spice to my company.

Whether you are like me or are already a networking natural, here are a few tips I’ve picked up along the way. I like to call them my Four Cardinal Rules to Networking Awesomeness. Enjoy!

Cardinal Rule #1: Just Do it

The truth is simple: you cannot afford to skip out on networking opportunities. Yes, you are busy. You’ve family obligations and looming deadlines. It’s tough to find the time. Maybe, it’s even a little nerve wracking. (Shy, anyone?) But the hard, cold truth is the benefits of networking outweigh any possible obstacles or excuses.

Think of it like this: as you build strong relationships, you build credibility. Credibility gets you recommended and hired. It’s as simple as that.

If you are new to the game of networking and aren’t quite sure where to start, here are some ideas:

If the thought of walking into a room full of strangers turns your stomach, here’s a bit of good news. Gone are the days when networking meant only attending events. (Wait, wait. Hold those horses! You still have to attend some things, but what I mean is that networking is so much more than face-to-face schmoozing in today’s digital age.) Networking is blogging. It’s Facebook. It’s Twitter. And it’s definitely LinkedIn.

Take it straight from LinkedIn:

When it comes to digital networking, you have a myriad of choices. Each week, it seems, more pop up. Your decision should take into account which channels are used by your current and potential customer base and which are best suited to communicate your content!

Cardinal Rule #3: We Treasure What We Measure

Maybe the most important bit of advice I can offer you as you embark on a networking adventure is to be ready to measure your efforts. You’ve probably heard the saying, “we treasure what we measure.” The adage more than holds true when it comes to networking: honestly, it means the difference between networking success and failure.

A recent study, involving 12,000 subjects, on networking turned up some interesting info:

The point? People who measure their networking efforts get results.

Here’s the thing, though: measuring networking can be a bit tricky. However, as much of your networking efforts will be digital in some form or fashion, you can take advantage of the built-in metrics systems common to most social networking sites. Alternatively, you may want to look into some third party tools or even build your own using APIs. Search online or ask around: there are tons of options out there!

However you go about it, you want to be sure you track the following:

Once you know how well your networking efforts are working you can troubleshoot. What changes can be made? What might work better? Adjust your strategy and repeat!

Cardinal Rule #4: Be Yourself (or a Polite Presentable Version Thereof)

Once you’ve made a contact, the most important lesson you can remember is that what you say next matters. Your prospect is a person. Your goal is not to sell; it’s to develop a relationship. Remember your manners and the art of conversation. Skip the script and focus on relating to them. And the easiest way to do that is to be yourself!

Look, take it from a gal, who not long ago, couldn’t network beyond the porcelain goddess: networking is a necessary (and not-so-evil) evil. Get a plan. Use my cardinal rules to networking awesomeness. Before you know it, you’ll be a networking guru!