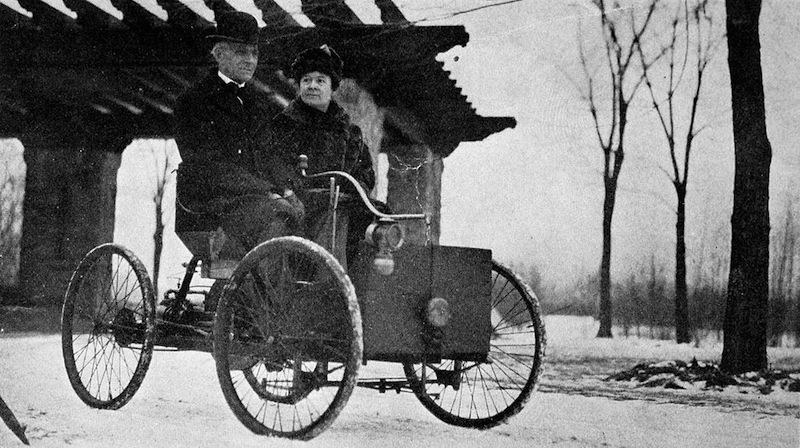 Henry Ford has a quote attributed to him that makes sense.

“Apprentice yourself in failure.”

Success needs failure to if you are going to succeed. For Henry Ford, he took that quote and truly lived it, experiencing multiple failures over time. When he began his career at twenty three, Ford was looking over gas powered engines and deciding the best ways to make these machines operate in a manner where they could successfully move people. In his mind, he was thinking about carriages that no longer needed a set of horses and this led to the first seed for an automobile to be planted in his mind. Although, the modern idea of what a vehicle looks like would take him years to achieve.

Taking to his shed, he would spend his days working on his plans to create a vehicle, while working for the Edison Illuminating Company overnight. His goal was to create an engine that featured an internal combustion system that would help to move a vehicle. By 1896 he had his first prototype, the Quadricycle that he took to the streets of Detroit to show it off.

Mr. & Mrs. Henry Ford in his first car, the Ford Quadricycle | Image from The Truth About Henry Ford, by Sarah T. Bushnell

First Bump in the Road

While there was interest for this vehicle, the Ford Quadricycle didn’t meet the need for a large scale production and Henry was sent back to the drawing board. This time, he began thinking about the production process and how his model needed to meet the requirements that are in place. For this he needed something that people would not only show interest in, but it also needed to be something that mass production would eventually be an option on. With a plan in place that was compact and sensible, Henry knew what he needed next was a financial backer.

William H. Murphy learned of Henry Ford’s prototype and agreed to work with him. They created the Detroit Automobile Company. While things looked promising at first, the move proved to be another nightmare for Ford. The design had to be reworked and parts had to be taken in from different places and the weight of the project no longer seemed probable. Despite Henry working to make a name and to be successful, he had tarnished his image and the company closed in 1901 with no one believing in the efforts of Ford or his future as an automobile manufacturer.

Henry didn’t focus on the fact that he failed. Instead, he looked as to what the problems were and how he could correct them. The first thing he noticed is that he needed a smaller and lighter vehicle that could be quickly produced. The next concern was that he couldn’t cater to all the needs of the customers from the start. Instead, the focus needed to be on the main concerns and additional luxury items could be added in on future models. Convincing Murphy to give him another chance, the pair formed the Henry Ford Company. However, Murphy had his hand in everything and Murphy attempted to guide the direction of the company against Ford’s wishes and finally, Ford quit. This caused Murphy to put the word out there and Henry Ford was blacklisted. At the time it seemed that Ford had finally dug his own grave.

For months, Henry tried to find a backer in the United States that would help him to run a company in a manner that would be successful. The word of two failures and blacklisting from Murphy seemed to make the cause hopeless. Until a man from Scotland named Alexander Malcomson came around.

Having made his fortune in coal, Alexander was receptive to unconventional means of being successful. He agreed to give Henry Ford the money he needed for his business, without getting in the way of the vision. Ford then began to work on the Model A vehicle which was the lightest and most durable car to be made at the time. With an assembly plant setup for a speedy production of an impressive fifteen cars per day, a record for the time, he opened his doors and orders for the Model A began to pour in.

With Henry Ford, his persistence to his ideals led him to failure. Instead of struggling to find his footing and giving up, he continued to chase his dreams and decided that bumps in the road weren’t something to give up over. Instead, if you hold true to whom you are and learn from the mistakes in your past, you can continue to grow and to thrive and eventually, you can reach a point where you can take the reins and follow your dreams. Because the other entrepreneur who ever truly fails in their lifetime, is the one who never picks themselves back off the ground when they come into hard times.